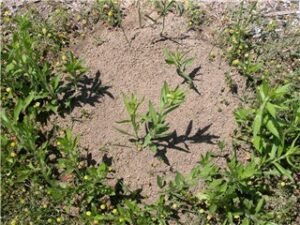 Most people do not think of fire ants as beneficial insects, but they are one of the more important beneficial insects found in cotton in areas where fire ants are common.  Cotton is not the only crop in which fire ants are considered to be beneficial.  Research in Louisiana has calculated a value for the benefit that fire ants provide to sugarcane producers by helping control the sugarcane borer.  Actually, fire ants really are not that important in conventionally tilled fields because frequent tillage keeps them from establishing colonies.  Thus, in conventionally tilled fields, the benefit of fire ants can only be observed around the margins of fields where fire ants forage from mounds located outside the field.  However, no-till fields provide an opportunity for fire ants to establish colonies within the field.  Scouts quickly learn that one must scout no-till fields differently from conventionally tilled fields – you want to keep moving and not stop in one place for very long.  Boll weevil eradication is another factor that has favored an increase in the importance of fire ants.  Reduced spraying means reduced mortality of foraging workers and establishing queens.

Fire ants are generalist predators and omnivores, which just means that they will eat most anything that they can catch or find.  In addition to insects, they will also feed on seeds and other plant materials, and act as scavengers on dead animals.  In cotton fields, they forage both on the ground and on the plant.  They are heavy predators of budworm/bollworm eggs, and in no-till fields where fire ants are abundant, it is not uncommon to observe egg lays as high as 50 to 80% that fail to result in a treatable population of larvae.  They also prey readily on all sizes of caterpillar larvae, including large larvae that have moved to the ground to pupate.  They are one of the few predators that successfully find and kill boll weevils, by chewing into infested squares and removing grubs and pupae.  In corn, fire ants are important predators of southwestern corn borers, and they can also be important predators of caterpillar pests in no-till soybeans.

On the negative side, fire ants also prey heavily on other beneficial insects, and populations of other beneficials are often lower in fields where fire ants are present.  Fire ants will often tend and protect honeydew producing insects, like aphids and the nymphs of the three-cornered alfalfa hopper, and populations of these insects are often higher in no-till cotton, or around field borders.  Still, these ants are such voracious predators of caterpillar pests that they usually more than make up for the reduced numbers of the other beneficials.