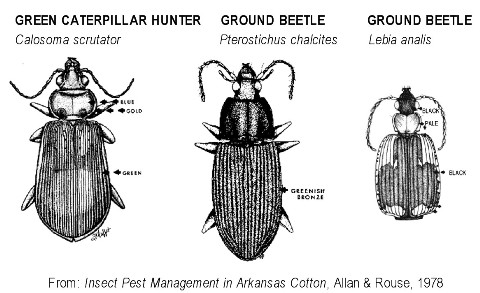 There are many different species of ground beetles that may be found in row crops. Although these beetles are common, they often are not recognized as predators. One reason for this is that they tend to be more active at night and hide under crop debris and in cracks in the soil during the day. Most species have relatively long life cycles and complete only one or two generations per year. Adults of some species may live several years. For this reason their populations are slow to rebound if disrupted by insecticides. This is one group of predators we may see and appreciate more in no-till and following adoption of tools such as boll weevil eradication and/or transgenic Bt-cotton that reduce total insecticide use.

The accompanying drawings show three of the more common species of ground beetles that occur in our major row crops.  Adults range from 1/4 inch in length for many of the Lebia species and up to 1.5 inches for some of the “caterpillar hunters”.  The adults are long legged, quick moving beetles that have broad, hard wing covers.  The head is narrower than the thorax and the mandibles are strong and easily seen.  Some of the caterpillar hunters are metallic green or blue in color, but most species of ground beetles are drably colored.  The Lebia species are commonly seen in the sweep net when sampling soybeans or when sweeping cotton for plant bugs.  The larvae are more “worm-like”, but have conspicuous legs and mandibles and are also quick moving.

Both adults and larvae are predatory, although the larvae of some species are parasitic and are considered general predators.  Caterpillars are favored prey.  Small tobacco budworm and bollworm larvae are probably at greatest risk of being attacked when moving between feeding sites.  Mature larvae are particularly vulnerable to the caterpillar hunters and other larger ground beetle species when they move to the ground to pupate.  One species of caterpillar hunter was reported to consume an average of 41 large gypsy moth larvae during its 14-day larval feeding period.  As their name implies, many species are primarily ground foragers, but some species, particularly the Lebia species and some of the caterpillar hunters, also forage in the plant canopy.  Because they occur in higher numbers and have a tendency to forage on the plants, the Lebia are one of the more important groups of ground beetles.