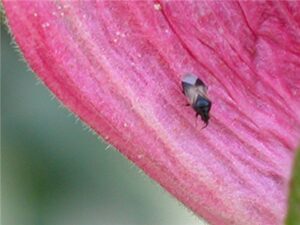 This insect is often a very important predator in field crops. However, because of its small size, it is often overlooked. Orius occurs in all major row crops, and it is present throughout the season. It is an important predator of thrips and often appears in the fields shortly after emergence. Quite often it is the smaller, less noticeable predators that provide the greatest benefit, and this is definitely the case with Orius. This is one predator that all scouts need to learn to recognize and appreciate. They often build to relatively high numbers on early season populations of thrips and mites. When this occurs, they can be of real benefit in ‘buffering’ populations of many caterpillar pests during mid and late season.

Like the tarnished plant bug and big-eyed bugs, Orius is a true bug and belongs to the order Hemiptera. The adults are sometimes mistaken for chinch bugs, but although they resemble chinch bugs superficially, the adults are much smaller (about 1/16 of an inch in length). Adult Orius are black with a white band across their backs and a white area over the end of the abdomen. The nymphs are elongate in shape and yellowish or yellow-orange in color. They are often mistaken for thrips, which is one of their primary prey items.

Insidious flower bugs feed primarily on thrips and spider mites, and when these pests are numerous, Orius can build to notably high numbers. One reference reports that nymphs are capable of eating an average of 33 mites per day. Eggs of caterpillars, such as bollworm and tobacco budworm are also favored prey, along with newly hatched larvae. This predator is common in corn, where it is often found searching for bollworm eggs on the silks, and it has been reported to consume as much as 54% of the eggs. It is also an important predator of eggs and small caterpillars in soybeans. In cotton, Orius are often found in the blooms, where their primary prey is flower thrips. They will also readily attack the small larvae of various pest species that they encounter. This makes them an important predator of bollworms and fall armyworms.