Cotton Cultivated Website Provides a portal that integrates websites, downloadable documents, social media and real-time news feeds that have been “cultivated” in an effort to reduce the time spent sort through pages of irrelevant search results. 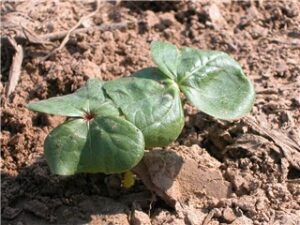 Each year more and more technology is delivered via the seed and as the convenience factor increases, so does the price.  As a result, seeding rates continue to decline.  It is now more important than ever to think about seeding rates in seeds per acre or seeds per foot.  Cutting seeding rates can save you money but precise planter calibration can save you not only money but also the headaches of replanting.  Research done over the years has shown that lower plant populations can achieve similar yields, but 3-4 plants per row foot is consistently the highest yielding and easiest plant population to manage.  When cutting seeding rates don’t forget the fungicides and think twice about cutting seeding rates during early planting.  The last thing to consider when determining seeding rates is the warm AND COOL germination tests.  Many producers forget about the importance of the cool germ test.  Consider this, germination is a very general term and most seed will germinate but the real test of vigor is the cool germ test.  The cool germ test is much more similar to the planting conditions that you will face and seed with a cool germ test of at least 60 should be used.  Seed is expensive and getting stand is critical, so don’t settle for poor quality seed

Defoliation is the shedding of cotton leaves that usually occurs when the leaves become physiologically mature. Leaf shedding (abscission) results from activity of special cells at the base of the leaf petiole where it joins the stem. This area is called the “abscission layer.” Defoliation can be caused by a light frost, disease, drought or mineral deficiency. It also can be artificially induced by the use of certain chemicals called “defoliants.” In situations where canopies are dense and there are significant numbers of green bolls that need to be opened, two applications are often needed. Often, you should plan for a two-pass approach instead of getting less than desirable results from an expensive one-shot approach requiring a second application to finish removing leaves. The goal of the first application is to remove as much foliage as possible exposing the unopened bolls without causing desiccation.

What are the benefits from defoliation?