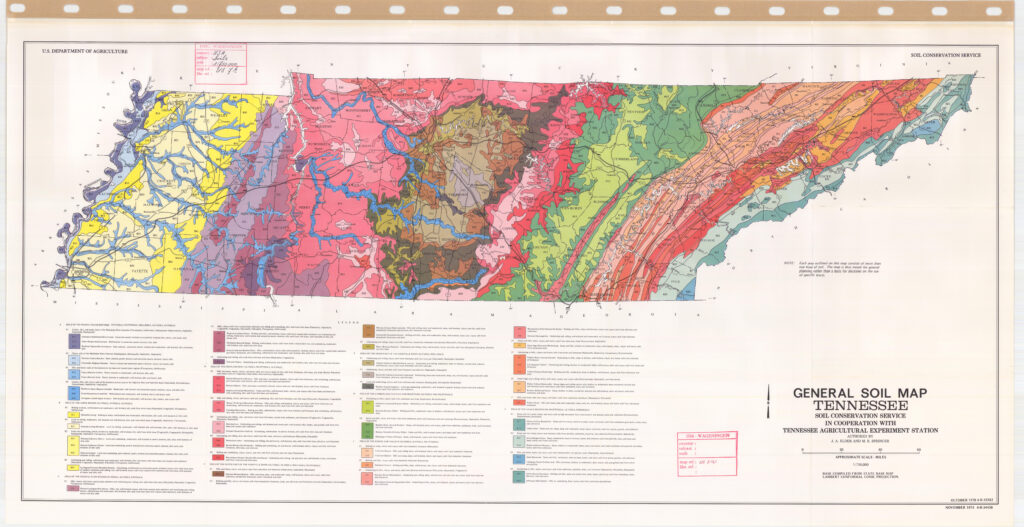 Soils of the Major Stream Bottoms

This region comprises the bottom land of the Mississippi, Tennessee and Cumberland Rivers and their tributaries and is characterized by flat or nearly flat area of productive soils that range from loamy to clayey. The loamy soils around the streams are mostly well drained. This is the most intensively cultivated area in Tennessee. Soybean, cotton, corn, wheat and hay are the principal crops. Bottom land hard woods occupy the wettest places.

Soils of the Loess Region

The loess region consists of nearly flat to rolling upland. The soils are formed in loess and can range from 30-90 feet in thickness along the western edge and gradually thins to 3-4 feet. The soils are silty and fertile and range from poorly drained on some flat land to well drained. Fragipan are common in this soil area. This region has the largest acreage of cropland in Tennessee.

Soils of the Coastal Plains Region

The coastal plain region is predominantly hilly. The soils formed mainly in sand and clays deposited by ancient seas. The soils are highly leached, low in fertility, and strongly acidic. Most are moderately or well drain but tract of poorly drained soils is common on the bottoms, terraces and depression areas on the upland. Good quality cropland is maintained on the bottom and terraces which are intensively cropped for soybean, corn, and cotton.

Soils of the Highland Rim

This region consist of predominantly undulating to hilly eastern, northern, and southern parts. The western is more dissected and ranges from hilly to steep except for a few isolated gently rolling plains. The soils are underlain by limestone. The soils on the hills sloped formed from limestone and have clayey and cherty subsoils. on the smooth area and hill cap the soils formed from thin loess and limestone residuum. Forest, hay and pasture are the main uses. Corn, soybean, small grains, nursery, and tobacco are crops commonly grown on the gently sloping land.

Soils of the Outer Part of Nashville Region

The region consist of predominantly hilly and steep with widely scattered tracts of undulating and rolling land. Nearly all of the area is underlain by phosphatic limestone. Outcrops of limestone is evident in some locations. some of the higher hills, especially on the southern part, are capped with cherty limestone. the soils range from shallow to deep over rock and medium to high in phosphorus. Some of the uplands have deep well drained soils and known for their phosphorus content and high productivity. Pasture and forest occupy the largest acreage.

Soils of the Inner Part of Nashville Region

The region consist of predominantly rolling and undulating with occasional flats and isolated hills. The soils in this area is underlain by limestone. Outcrops of limestone is evident in some locations. Depth of soil ranges from few inches to 6-8 feet near river where alluvium has been deposited. Most of the productive soils are located in mostly on the narrow bottoms and old terraces . The soils here are redder in color and lower in phosphorus compared to the soils of the outer part of the basin.

Soils of the Cumberland Plateau and Mountains

The terrain in this region is a gently rolling to hilly highlands marked on each side with a prominent escarpment. The soils in this area are underlain by Pennsylvanian sandstones and shales. The soils formed either directly from these rocks or from materials weathered from them and moved downslope. The dominant soil are about 2-4 feet deep over the rock, well drained, loamy, low in natural fertility. Much of the region is forested. The cleared land is used largely for hay and pasture and small field crops of such as corn, vegetable, soybean, and tobacco.

Soils of Ridges and Valleys

The terrain in this region is a succession of tall wooed parallel ridges and narrow ,cleared , intervening valleys. The soils in the ridges are underlain by sandstone and hard shale, cherty, and dolomitic limestone, whiles the valleys are underlain with soft shale and clayey limestone. This soil depth ranges from shallow over shales and sandstones to very deep over the dolomitic lime stone. Most of the upland soils are highly leached , strongly acidic and low in soil fertility. the small stream bottoms in this region generally are narrow, few are as much as 100 yards wide. The soils in the stream bottom are fertile and productive. This area is used largely for pasture, hay, forest, and burley tobacco.

This soil area is located high mountains , hills and numerous valleys and coves. The soils in this region are underlain by phyllite, slate, sandstone, quartzite, granite and gneiss. The soils formed from these rocks are highly weatherable minerals. Generally, the soils in these areas are loamy with rock fragments and are on the upper part of the mountain are about 1-3 feet deep over rocks. In contrast, soils on the talus or lower part of the slopes are about 3-7 feet deep over rocks. The valleys contain a variety of soils , most of them are deep , well drained, loamy, productive soils. The soils are used mainly for pasture, hay, and vegetables.